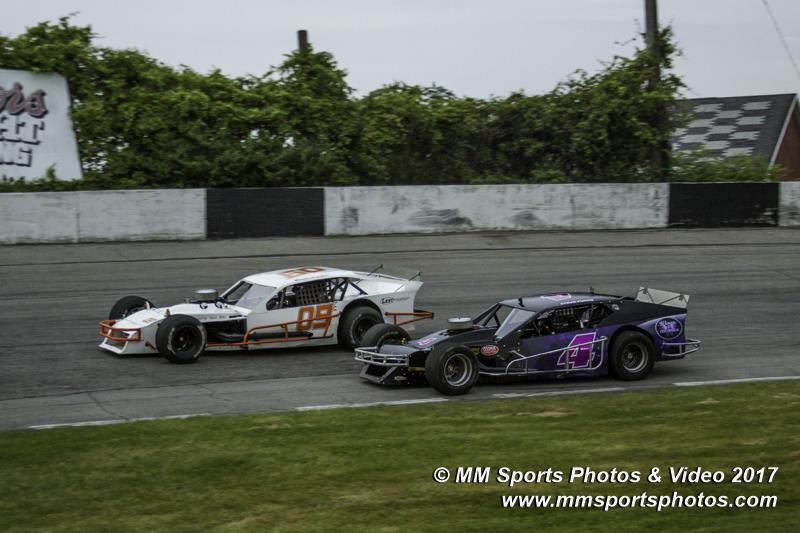 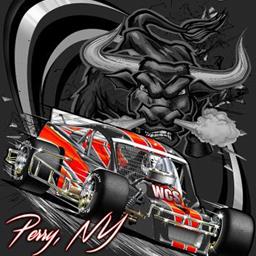 Pirate Night At the BullRing

Â Â Â Â Â  Rrrrrrrâ€¦.. It was Pirates night at the Wyoming County Intl. Speedway, and all the point leaders took home their portion of the Pirates Booty.Â Â  Pirates night is a special night here at the Blacktop Bullring.Â Â  Itâ€™s a night of fun for kids and adults alike.Â Â  Water balloon fights and the kids get to throw water balloons at the cars and drivers of the Pirate trailer racers.Â Â  As they race around the speedway with cars, trucks and SUVâ€™s pulling boats, campers and any homemade trail is legal.Â Â  This can be seen on ourÂ Facebook page see some in car coverage of this fun event.

Â Â Â Â  The racing action kicked off on this overcast and ominous sky night with our all ways exciting SST Super Stocks on Pirate Night and thou this is a light on cars class, itâ€™s not light on excitement.Â Â  A couple of the local favorites would bring this class to green as the #9 of Jason Landcastle and the #47 of Eric Hastreiter were set for their 25 lap main event.Â Â  Hastreiter would jump out front on the green as troubles have plagued the Landcastle for a few weeks now after a strong start to the season.Â Â  It would only take a few laps for Hastreiter to feel the heat from current High point man Dave Krawczyk on his rear bumper.Â Â  Also in tow was the #20 of Mike â€œScrappyâ€? Chenaille and Daniel Majchrzak.Â Â  Krawczyk showed his dominance as he rolled by the Hastreiter machine and then drive it out to about a straightaway lead.Â Â  The battle was on for positions 2-4.Â  Majchrzak in a backup car, known as the â€œHoney badgerâ€? would leave nothing on the table as he had the car facing every direction look for the speed to catch Krawczyk, but would come home 4th. Chenaille would come home second.Â Â  â€œThis is a win for us, as the 11k is in a class by himselfâ€? said Chenaille.Â Â  Hastreiter would bring his ride home third and was happy that the car ran all 25 laps without a mechanical issues.

Â Â Â  Rrrrrrâ€¦â€¦ Itâ€™s the time of the night for the hairy and scary 4 cylinders to do battle on Pirate Night.Â Â  One regular to the WCIS of John Parthemer and Spencer regular Dave Heimes were on the front row.Â Â  This class is always fun to watch, and thou it is a starter division, these drivers take it very serious.Â Â  As we saw out three lady drivers in this class finish, 1,2 and 3 last week.Â Â  It was sort of weird that at the 10 lap halfway point the event winner was not in one of the top 5 positions.Â Â  That of course is the #94 of Paul Flye.Â Â  Flye started back in 7th position and had to battle to the front with drivers like Dennie, last weekâ€™s winner, Heimes. Bradshaw and Carrie Bolton.Â Â  This class is so tight with a great set of rules that it took a few cautions and restarts to give flye the opportunity he needed to win another feature event.Â  With and exciting Green white checker to finish this feature.Â Â  Flye proved why he is the point leader and the battle for second thru 5 was on,Â  Heimes, Dennie, Ricketson and Bolton.Â  Thatâ€™s how they would cross the line.

Â Â Â Â  SST Modifieds would close the Pirate Night racing program with the Moonshinersâ€?57â€?.Â Â  57 laps of all green flag laps counting.Â Â  16 mods in attendance for this Pirates Night event.Â Â  Nate Michielsen coming off his first Mod heat race win and New hall of famer at WCIS Tommy Weist would start this race off.Â Â  Michielsen would continue his hot streak and lead this race till the first caution flew slowing the pace and bring the hot dogs up on Michielsenâ€™s rear bumper.Â  Majchrzak, current point leader, Billy Ray Pruitt, Rick Knapp and Toad Bradshaw.Â Â  Every one of these cars are very capable of pulling off the feature event.Â Â  A few more cautions and restarts and we would find that the Hot dogs would occupy the first half dozen spots.Â Â  It was Majchrzak that had his ship set on full steam forward.Â Â  The TWR sponsored ride was in a class by himselfÂ  and letting the rest figure out who would be second third and so onâ€¦.Â Â  Majchrzak would develop a half track advantage over the second place running car of Timmy Lewis (Lewis first time back in a car after a major broken leg that required surgery). â€œI just wish we had one more caution so I could see if we had anything for Danielâ€?Â  said Lewis.Â Â  Billy Ray Pruitt came home a very respectable third as his handling went away about midway thru the 57 lap feature.Â  Majchrzak saidÂ  â€œ That this race was won in the shop. My crew has busted their butts the last few weeks and this is the pay off. â€œÂ

Â Â Â Â  The vintage cars were on hand to celebrate the olâ€™ racers reunion.Â Â  Some of these drivers bring their cars for photo ops. Others to race and take their photo ops in Victory Lane.Â Â  Very glad to see these cars of yester year and the former drivers and crew personnel.

Â Â Â Â  Check us out at www.thebullringwcis.comÂ  or like us on face book.Â Â  Get all the latest and look for weekly special.Â Â  We will see your faces at the races August 5th.Â

Â  Â  7/29/2017 the Bull ring will be OFF, for race teams to take a weekend with the families.Â Â  But we will be back to the hustle and bustle,Â  August 5th SST Super Stocks get their chance to conquer the !/3 mile Blacktop Bullring for 57 laps and the always fun, Junkyard Soccer.Â  Smash and crash are always a crowd please after the regular racing program.